We are building an experiment to study transport properties of Fermi gases in superfluid and normal states. The ability of materials to transport spin, mass, and heat plays an important role in many technological applications, yet predicting transport properties remains difficult in the presence of strong interactions. We will experimentally measure transport properties of atomic Fermi gases with strong and well-characterized interactions to provide quantitative tests of many-body theories. Our experiments will employ tailored optical potentials to create controlled non-equilibirum spin, heat, and mass currents, allowing us to gain insight in the dynamics of quantum many-body systems of fermions. Our results will also contribute to the understanding of other fermionic systems such as electrons in sold-state materials and neutrons in neutron stars, where similar many-fermion problems arise. 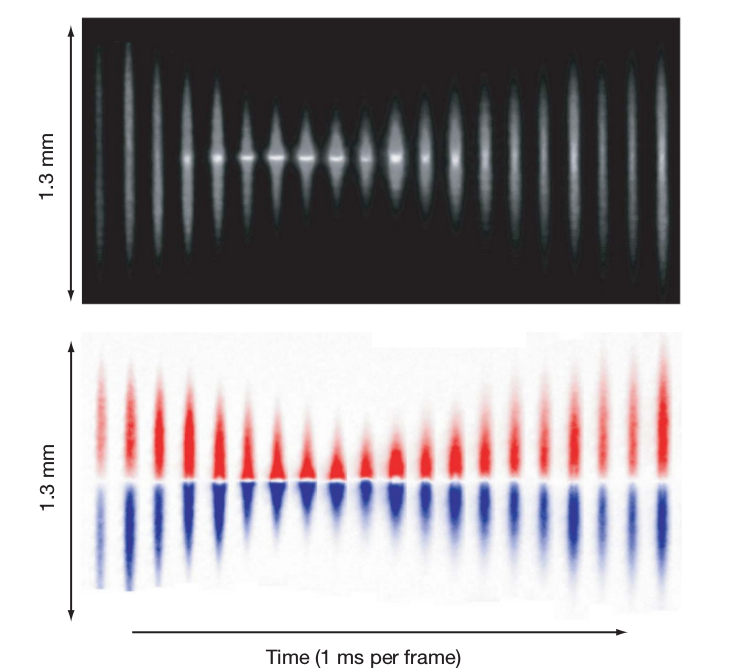 A spin current consists of a net transport of spin through a system. Spin currents in a two-component (spin-1/2) system can arise due to relative motion of opposite-spin particles, or due to spin polarization (population-imbalance) of flowing particles. Collisions with defects typically lead to damping of both types of spin currents. However, even in the absence of defects, collisions between particles lead to an intrinsic damping, or spin drag, when the spin current results from relative motion between spin-up and spin-down particles. In this case, the damping of spin current results from friction between the opposite-spin particles. We measured the effect of spin drag in a strongly-interacting gas of fermionic atoms. We initiated a spin current by preparing an out-of-equilibrium Fermi gas, with a large spatial separation between spin-up and spin-down centers of mass in a harmonic trap. The harmonic trap forces the two components together, while the two components recombine and approach equilibrium. At first, the two components collide, bouncing off one another despite being a million times less dense than air, due to strong interactions. Over time, the spin-up and spin-down components diffuse into one another, and by observing the approach to equilibrium we are able to extract the spin drag coefficient and spin diffusivity. At low temperatures, we find that the spin diffusivity approaches ħ/m, where m is the atomic mass, corresponding to the Mott-Ioffe-Regal limit for a Fermi gas with resonant s-wave interaction (unitary Fermi gas). This work was carried out in the group of Martin Zwierlein at MIT. For more information, see Nature 472, 201 (2011) and New J. Phys. 13, 055009 (2011). 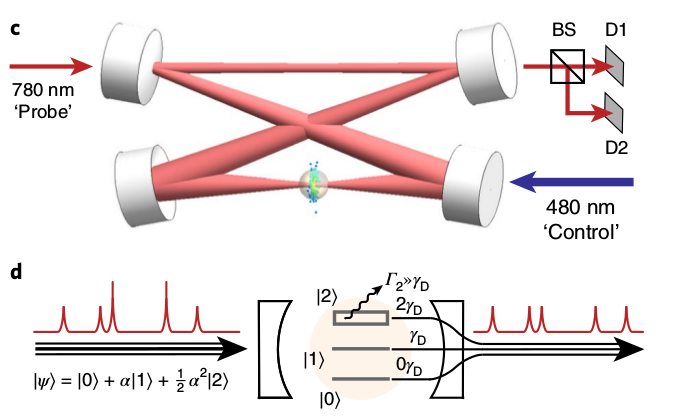 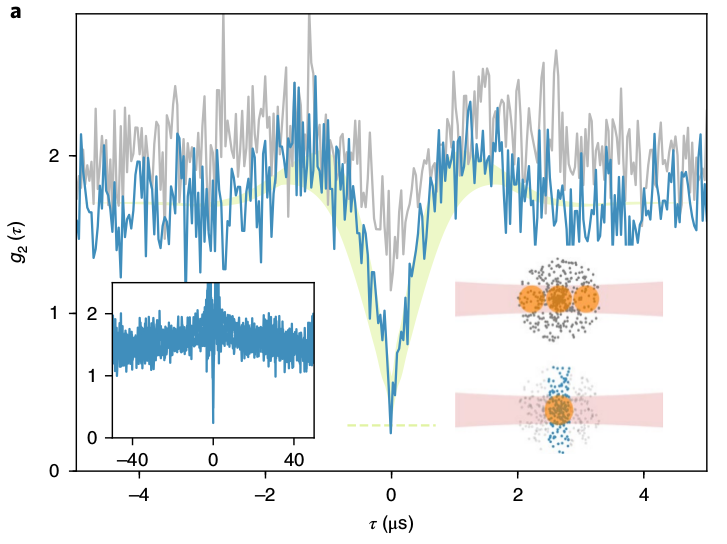 While photons in most nonlinear media interact weakly at the single-quantum level, the strong interactions between Rydberg atoms can induce strong interactions between individual photons. We used a four-mirror optical cavity to couple light to an atomic medium and hybridized the cavity light with Rydberg excitations to form Rydberg polaritons. By measuring the second-order autocorrelation function of the emitted light from the cavity, we observe strong anti-bunching, a key signature of strong polariton-polariton interactions. In combination with our work on synthetic magnetic fields for photons in optical cavities, this system can be used in future work to create quantum Hall states of light and potentially to realize anyon excitations. For more information, see Nature Physics 14, 550-554 (2018) and the research group of Jonathan Simon at UChicago.

Fermions in the 3D to 2D Crossover 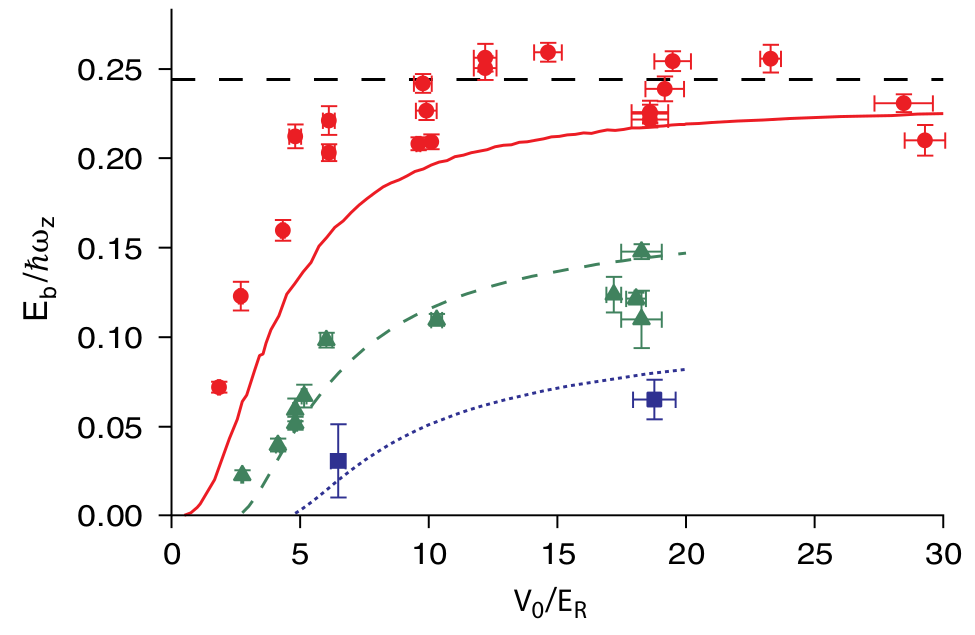 Many solid-state materials, such as the cuprate high-Tc superconductors, consist of coupled two-dimensional layers. Coupled-layer systems interpolate between two and three dimensions, tending toward two-dimensional behavior in the limit of weak coupling. We investigated the effect of inter-layer coupling on the binding energy of pairs of fermionic atoms in a one-dimensional optical lattice. In a strong lattice (weak interlayer coupling), we observe bound states even for interactions that are too weak to support a bound state in 3D. For more information see PRL 108, 045302 (2012).

Molecular gases in the ultra-low temperature regime are being pursued for applications to many-body physics with long-range interactions, interacting qubits, and precision measurements. In particular, molecules with electric dipole moments exhibit long-range dipole-dipole interactions. We demonstrated long-lived samples of ultracold molecules with both electric and magnetic dipole moments.

We employ magnetic Feshbach association of 23Na and 6Li atoms followed by light-driven STIRAP transfer to the rovibrational ground state of the NaLi triplet potential. As 23Na obeys Bose statistics and 6Li obeys Fermi statistics, the resulting molecules have fermionic character. Despite the higher energy of the triplet potential relative to the singlet potential, we observe long collisional lifetimes owing to Fermi statistics. Future work aims to increase the density of NaLi molecules for loading into an optical lattice and implementation of spin lattice models. See PRL 119, 143001 (2017) and the research group of Wolfgang Ketterle at MIT.